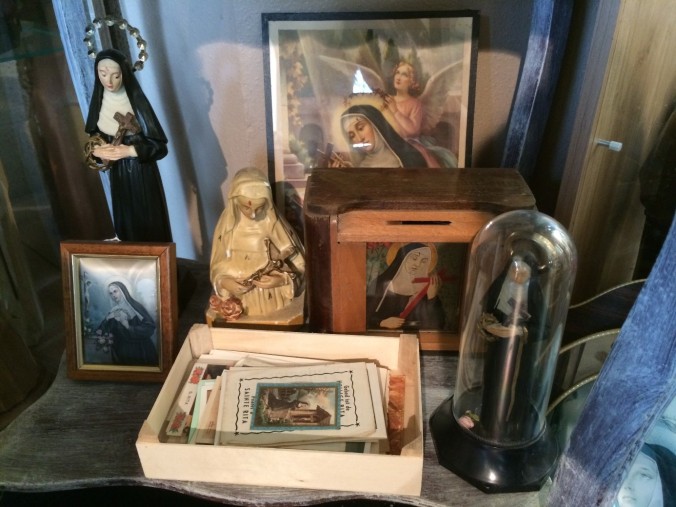 Ill.1. Saint Rita images in the Museum voor Volksdevotie (Miskom, Belgium) an initiative of a local layman. Non-professional collectors often preserve source material that does not make it to the official museums and archives and are therefore definitely worth contacting.

It is by far the craziest thing I have ever done to get access to sources. But here I am. It’s early morning and I am sitting in a church waiting for mass to begin. About two months ago I found out that the cult I thought had not survived the legal trial and asylum stay of one of ‘my’ stigmatics had actually endured and is still ‘alive’. The only chance I have this year of meeting the devotees is today, the anniversary of the miraculous cure of the stigmatic almost a century ago. No pressure. There is only one problem: I have absolutely no idea what the devotees look like. To make matters worse, it is not a small church and even though it is a weekday it is starting to get pretty crowded. A colleague of mine agreed to join me on this mission and we are scanning the audience. The devotees must know each other, right? So they are probably sitting together. O.k. so that means we are looking for a group – probably of slightly older people. To our frustration, there are no real groups in sight. That is, until circa five minutes before the mass starts and then suddenly three groups enter the church. They all fit the profile. This means watching their movements and interactions for we will not have the time to run after all three of them once mass has ended. In the end, it is a subtle movement that gives them away. The moment the intentions are read out loud and the name of the stigmatic is mentioned, I see an older lady gently touching the shoulder of the lady in front of her and smile. I still feel a little awkward running over there after mass holding a picture of the stigmatic in my hands and calling out her name. Do they now her? Smiles and curious glances. It takes a while for me to explain who I am and why I am interested in their stories, but I have brought print-outs from our website and my university card so I must be a serious scholar. Gradually the mood shifts and I am promised a follow-up meeting and sources. What a morning.

Ill.2: Turning a set of sources into an archive. (Archives currently at the Ruusbroec Institute at the University of Antwerp)

Not all days start like this of course and my work includes ‘normal’ archival visits as well. But the type of mission I just described has been part of my – or rather our – work from the beginning. Addressing the bottom-up perspective sounds very nice in a project proposal text, but how do you find the voices of the ‘common’ laymen? How do you start looking? After years in the field, I think I am allowed to say that there is no general rule, no manual you can follow. You talk, you lobby, you listen, you plead your case and you get frustrated from time to time. But the sources, the wonderful, strange, familiar and unique sources, are worth every disappointment, every bizarre afternoon and all the times you question your sanity (or scholarly identity).

Can we get access to this level of popular response for each case? No. Some of the stigmatics did not hold people’s attention long enough, or no-one involved bothered to preserve any documentation. In those cases, if the stigmatic did not attract the attention of the ecclesiastical or official authorities collecting witness statements, it is almost impossible to hear the voices of the faithful. But do not despair, it is not because they are not on any official list of stigmatics or, broader, of mystical epiphenomena, that they did not attract attention. These lists are often compiled by one scholar, not seldom drawing upon the lists compiled by others and leaving us, in other words, with the usual suspects or slightly (geographically) imbalanced overviews. Our database currently holds the names and biographies of circa 250 stigmatics – a pretty impressive number. Many of these have never been on any list. The database will be publicly accessible from April 2019 onwards. As a bonus, we are adding source-information to the stigmatic-profiles as well. So not all of you will have to sit in a church scanning the faithful or plead your way into attics, cellars and living rooms. I would advise you all to do so anyhow. By taking slightly different paths we are preserving source material that can easily get lost and we hear voices that should have been heard long ago. ‘Follow your instinct,’ a wise colleague once told me, adding, ‘there is no such thing as luck in these matters. You need to move yourself into the right position and then, only then, can fate help you a little.’ In my case, it came in the guise of that gentle shoulder touch without which I would probably have left the church empty-handed.